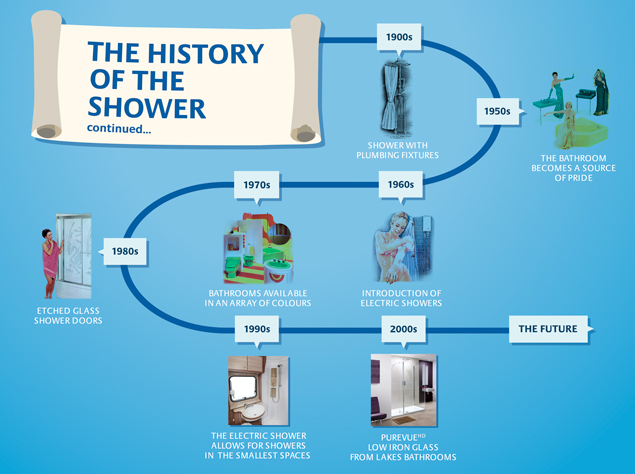 We last left you in the late Victorian era, a point in English history that the modern shower owes a great debt to. It was from this point we begin to see what closely resembles the image of the shower we know and love today.

So what made this period so pivotal? The combination of two things:

1. A new wave of ‘morality’, tied to which was an obsession with cleanliness and purity.

2. The industrial revolution and the succeeding years of engineering brilliance

From the 1880s onwards environmental and health standards rose sharply, with the introduction of an expanded London water supply network and improved access to gas lighting and heating throughout the country.

It’s important to note that at this time even the upper classes of England, mostly, didn’t have plumbing in their homes. They didn’t see the worth as their servants could heat water for them and the idea of a home with plumbing for the masses was way beyond their means; the shower was still the reserve of the knowing (lucky) few. 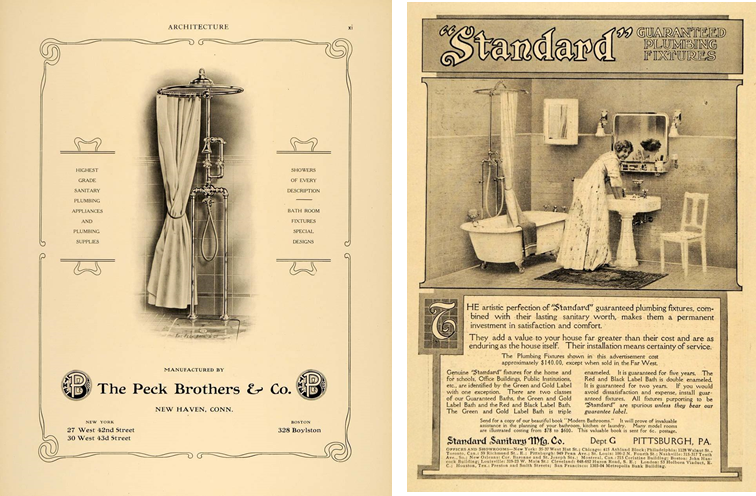 You’ll notice from these 1905 and 1911 plumbing fixtures ads, that the earliest forms of the over-bath shower of the early 20th century is miraculously unchanged in many ways compared to some of the over bath options we see today.

For obvious reasons the evolution of the shower took a bit of a break during the war years as people’s attention, resources, and invention were focused elsewhere. 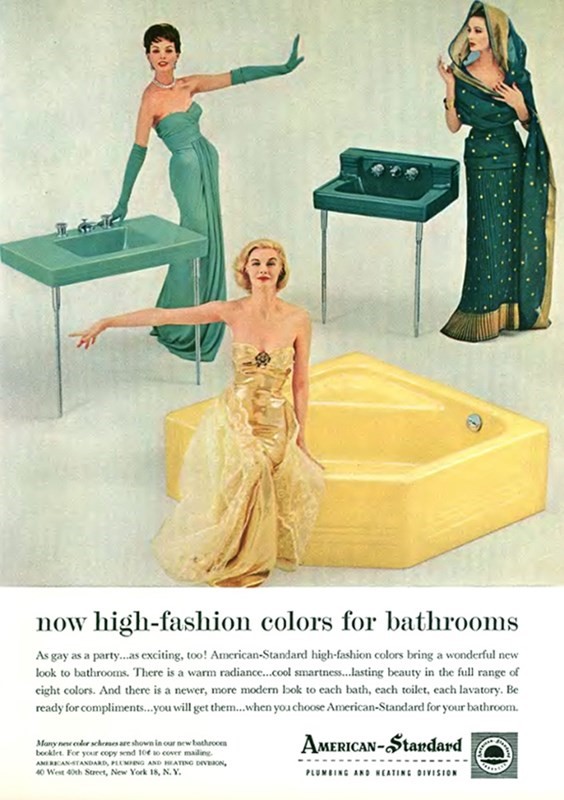 After years of austerity and hardship following World Wars I and II, coinciding with a sharp rise in the middle classes there was a general need for positivity, life, colour and aspiration. The glamour of Hollywood movies influenced a desire for certain luxuries and choice in bathroom design.

The bathroom was fast becoming a source of pride for the aspirational housewife of the 1950’s and 60’s, although the functionality of the shower remained much unchanged, it was now something that would start to become a little more commonplace in the average home.

Following the lead of the American market by the 60’s the English bathroom finally started to adopt the shower as an option. At this point the first electric showers were introduced, which finally saw an evolution from the water tank, providing people with the option of an instantly hot water supply.

The seventies simply saw the shower market grow further, becoming more commonplace in the average household, and saw the supporting bathroom furniture in a more varied selection of questionable colours. 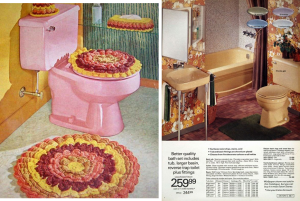 The Era of the power suit, the brick sized mobile phone, the CD player and the DeLorean. This really was the time of technical revolution, creating a culture of ‘more is more’ which can often lead to technical advances that aren’t always a valuable step forward – not all of which lasted the test of time. Manufacturers started to produce showers with multiple settings, multiple jets coming from different directions and even coloured lights.

Around 62% of all houses now had a shower, with the electric shower allowing for a shower conversion in the smallest of spaces. No household need go without.

Lakes Bathrooms introduces PureVueHD; the low-iron glass providing superior clarity AS STANDARD on our Classic and Coastline ranges. This may not be revolutionary in technology stakes, but for the first time this costly optional extra is available as standard at no extra cost, providing people with the superior shower experience we as a company always intended.

What does the future hold?

With the way technology seems to be advancing in other business and industry sectors we could make some pretty safe assumptions about the next evolutions of the shower. Some of which ‘might’ already be in development;

Have you seen the film ‘Minority Report’ or anything supposedly set in the future, where every technology seems to be controlled on a transparent glass screen? Well this technology already exists and has done for a number of years. Since the introduction of portable devices, people now spend very little of their time without access to a screen. This is the same with the bathroom, proven by this year’s alarming stats about the number of people using their smartphones whilst using the toilet! The shower screen and enclosure could simply the next step in this evolution, touch screen glass that allows us to browse and view whilst showering.