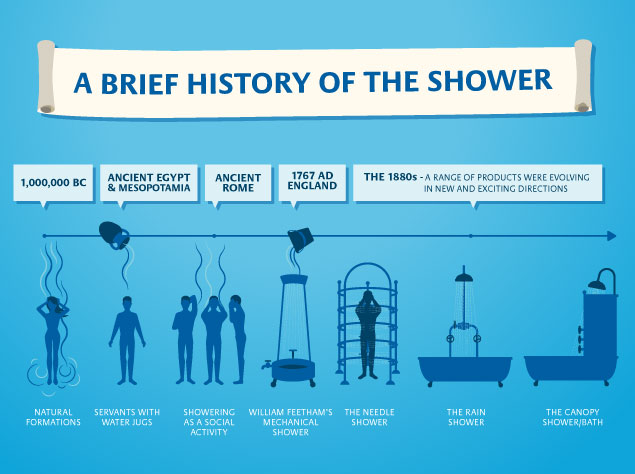 In terms of the history of invention the household shower is still a relatively modern one, especially in relation us filthy Europeans. The First domestic applications didn’t really surface till around 1900 but the history and evolution of the shower drastically pre-dates this; it’s this evolution and where we are now that we’ll be discovering now.

Let’s start at the beginning…

If you hadn’t guessed, this is a slight assumption, but the original showers definitely would neither of been man-made or indoors. The very first ‘showers’ would have been natural formations – think less ‘The Flintstones’ using a woolly mammoth to spray water through the bathroom window and more Raquel Welch under a waterfall.

There is some evidence to suggest that early advanced cultures had indoor shower rooms for the upper classes where servants would pour jugs of water over them for cleaning purposes.

The early Greek civilisation is the birthplace of the technical prowess that established the ideas of sewage systems, running water and the first iterations of what we can begin to recognise as a working shower system. Utilising aqueducts made of lead piping to carry large supplies of water and using water pressure to public shower rooms, the Greeks introduced showering as a social activity for the masses and not simple as the reserve of the wealthy. 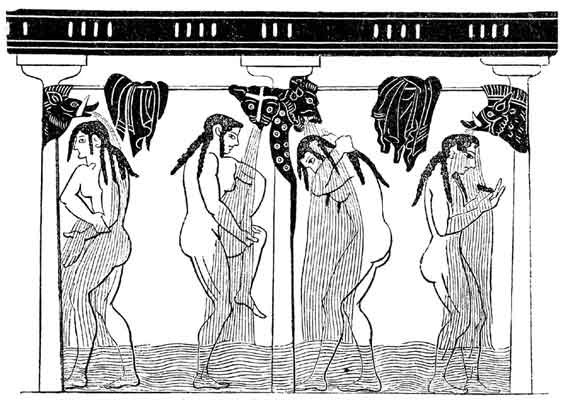 The Romans adopted the Greek showering pastime, but for the first time saw the true hygienic benefits, suggesting that showering should occur on at least a weekly or even daily basis. 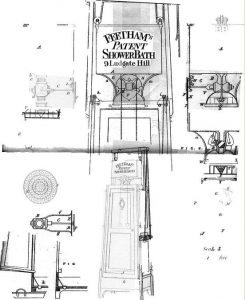 In 1767 Englishman William Feetham patented the first mechanical shower. The system wasn’t a rip roaring success because as it was operated by a hand pump, making it only a step up from your servant pouring water over your head as seen thousands of years earlier – it also just recycled the same dirty water over and over again. A few further iterations based around this original concept gained moderately more success; but real success wouldn’t begin to appear until 1850 when these systems were connected to a running water source.

Prior to the 1880s the majority of shower designs were rather like having a pail of water tipped over you from a height, but by the 1880s the range of products were evolving in new and exciting directions.

The needle or cage shower directed jets of water all-round the torso, but wasn’t really sold for pleasure or its cleaning prowess, as with many things in the Victorian era its was promoted for its supposed health benefits – often described as a liver shower or bath, thanks to supposedly offering a stimulating massage for internal organs. Needle showers were marketed to gentlemen’s athletic clubs as well as private houses.

A rain shower also known as a spray bath, was a desirable fitting for modern, hygienic public baths and hospitals. With an overhead spray coming from a circular head pointing straight down or slightly slanted the rain shower was a very close representation of today’s standard systems.

Canopy showers or canopy baths were produced by a number of manufacturers and varied from the simply functional to the highly ornate, with both options being the reserve of the very wealthy. These impressive shower bathtub combinations became the centrepiece of the room with some being up to seven feet high. With many being ornately carved, highly polished woods or finely enamelled on the exterior; this iteration of the shower started to signify a move into the shower as not only functional but also designed to enhance the home setting.

During this Victorian period of invention most showers were sold on pure functionality, heavily based on any associated health benefits. As we move out of the Victorian period we start to see the shower move into the common domestic home and further develop back into tools for enjoyment and functionality.

In the next parts you’ll see what has happened in the next century to lead to the showers we have today and the possible advances of the future.

To browse the beauty of contemporary showers enclosures click here.